Thelma Howcroft is a citizen and patient at Pembroke Hospital. She suffers from Cotard's syndrome and believes that she is a vampire.

Thelma wears dirty grey-white patient robes and a pair of brown slippers, like the other patients at Pembroke Hospital. She has shoulder-length messy black hair and deep blue eyes. Her skin is pale with some redness around the eyes. She is skinny, though not extremely underweight.

Thelma is dismissive of other humans, due to her belief that she is better because she is a vampire. Despite this, she has a friendship with Thomas Elwood and is attracted to him, despite his disfiguration. If Thomas is embraced and Thelma is spared, she will become more reclusive and try to use her "mesmerize" ability to force Jonathan to answer her questions.

Thelma, like all citizens, can be embraced by Jonathan Reid or spared. If Jonathan embraces Thomas before completing Thelma's "Wrong Target" investigation, she will be kidnapped by the Guards of Priwen who suspect her of being a vampire and she will have to be saved.

If killed before Thomas Elwood:

Why kill me, brother? We could have ruled this land together and forever...

If killed after Thomas Elwood:

Beware, child of the night, for I shall come back and have my vengeance!

Thelma Howcroft, 32 years old, female. A patient convinced she is a vampire and displaying all the symptoms of Cotard's Syndrome. This woman persuaded herself that she was dead, that her body was quickly decaying, and that she needed to drink blood to survive - needless to say, her assumptions were wrong. She roamed Pembroke Hospital at night in a theatrical search for the precious substance, but she doesn't go as far as to hurt other patients. The only person who didn't seem to mind her antics and morbid declamations was Thomas Elwood, a disfigured soldier who appreciated how Mrs. Howcroft didn't care about his mutilation. The two of them made a strangely fitting pair. Even when I took her live, Thelma Howcroft never ceased to see herself as a vampire, and only recognized me as her kind.Jonathan Reid 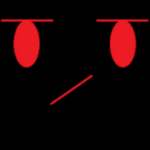