Usher Talltree is a human citizen and the Primate of the Brotherhood of Saint Paul's Stole. He resides in West End, in a hall underneath Temple Church.

Usher, like all citizens, can be embraced by Jonathan Reid or spared.

Usher Talltree, 45 years old(?), male. The man who seemingly knew everything and told no one. When I claimed his life, he granted what memories he wished. Yet, I cannot know whether what I found was the truth or a vision he wanted to share with me. Was he human? Unlikely. Vampire, maybe, but from a rare species or branch. He acted as a fortune-teller, but held powers bestowed upon the leader of the Brotherhood of Saint Paul's Stole, a group of so-called neutral observers who study vampires. However, Mr. Talltree relied too much upon the untouchable reputation of his Brotherhood. He could not foresee my attack, even less his death. His last thoughts sounded like a judgement. Jonathan Reid 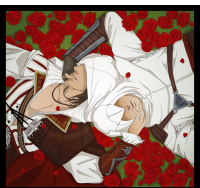